I've always been a fan of road trips.  Something about being in a confined space in an open area, the guilt-free understanding that fast-food may be your only option, the constant intake of large doses of caffeine, and the music... oh the music.  When I first met Sean I was in the middle of a personal mission: get someone to drive all the way to Canada and back with me.  At the time, I had never left the country and for whatever reason I really wanted to say that I had stepped foot on another nation's soil.  Easiest solution?  A quick drive (as in 25 hours) to Canada.  Combine the exhilaration of inhaling Canadian air with awesome friends, loud music and bad food and it sounded like a perfect Spring Break to me.  Unfortunately, nobody else agreed.  People would laugh my idea off... and say, "Oh Mary Susan...that would be fun, but seriously I think I’ll go to the beach instead.”  I secretly scoffed at their pathetic lack of adventure.  I mean seriously, did they not understand the vision??  We could camp along the way to avoid hotel fees and this bizarre venture would without a doubt be the birth place of a treasure trove of stories we’d all tell our grandkids. But the more I pushed, the more nobody agreed.  I had finally decided my dream was all but dead, when I met Sean.  I mentioned this little idea to him and he immediately said, "Sounds awesome.  I'll go!"  "What??!??" My radar went off.... This man (whom I had been spending more and more time with at Fazoli’s after class) was officially really cool. For a few days I gave the whole, “Go to Canada with this new guy I met named Sean” a lot of thought. Eventually though, I landed on the fact that we had only known each other for a few weeks and hitting the road to drive and camp for 4 days straight with a man many of my friends had never met seemed a little... ambitious.  Today, Sean and I often laugh and say, "What if we had gone to Canada together??" (Sidenote: 2 years later we did go to Canada together ... except this time it was by ferry, automobile, and floater planes... thank you Young Life for an awesome time in British Columbia...) I digress, point is, we're a fan of road trips and we often look at each other late at night and say, "Let's just drive to the beach.  RIGHT NOW.  DON'T THINK. JUST GRAB A BATHING SUIT AND GET IN THE CAR."  Unfortunately, one of us always squashes the spontaneity with a concern about work, or the dogs, or an upcoming obligation and we end the night watching Netflix, which is in its own right, very exciting. (I mean it’s like having a Blockbuster on your tv, ready for you to “rent” a film at anytime… Have we already forgotten how awesome this is??!?)  Point being, for Mother's Day, Sean is taking me out of town.  We're going on a road trip and landing on the Atlantic coast!! So friends, tomorrow I'll be hitting the road to drive to the beach and lounge for another long weekend.  Woohoo!!!  Thanks Sean!!! This Mama is pumped!!!

Oh... and just for good measure, here is a photo of us when we finally did reach Canada. 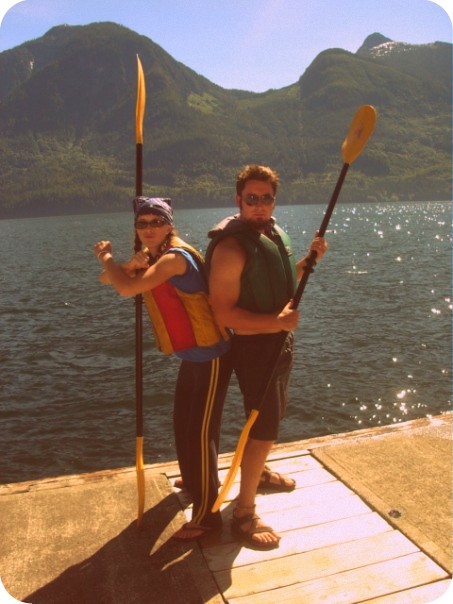 This also happens to be a failed album cover of a hip-hop band Sean and I used to be in called the                  Paddle Poets. For some reason we never gained any street cred.

Have a good weekend!

When Hipsters Have Kids

My friend Alice's facebook status today has this video with a caption that reads, "This is what happens when hipsters start having kids"   So funny.


Have a good Wednesday!
mae

I haven’t been very good at writing on here recently because I've been increasingly distracted by news on the Abiella court front.  Last week, we got very exciting news that papers were signed and our case was headed to court on Friday, May 4th (two days ago.)  I was hesitant to tell many folks since last time we thought we were going to court, we had to go back and tell everyone, “no… actually… it didn't happen.”  SO this time, I kept the news fairly quiet.    Friday morning (the day of our court date), Sean and I woke up and sat in our living room sipping coffee for what felt like an eternity. Ghana is five hours ahead of us, so our morning was nearing Abiella’s afternoon.  We couldn't bear the thought of going anywhere or doing anything until we had some news.  Had court happened?? Were they in court right then?? Eventually, Sean’s phone rang and our hearts jumped. Unfortunately, our coordinator was calling to inform us that someone didn't show up for court and our case had to be rescheduled.  So alas… we wait again…