First, to all of you who have offered a congratulations or gesture of support, I can not thank you enough. It means so much more than I could ever express.


***********************************************************************
Since last week we have been running in fast forward.  We have gotten our home study updated, reviewed, approved, and sent out again. (Thanks to our amazing agency who moves at the speed of light.) We have gone back to the doctors for our second physical, gotten about a million papers signed and notarized, printed out photos, prepared our updated papers to be sent to the appropriate places, and gathered all the documents needed to send off our dossier.  Phew.  What a whirlwind week.  Hopefully, on Monday we will send the dossier, (unless we decide to hand deliver it to Ghana) and on Tuesday we'll get our vaccinations.
I'm currently taking a break from writing a paper on Educational Leadership (Big thanks to the interviewees who helped me out last second!) to sip on some coffee, take a breather, and write this post.
I am grateful for the work and the busyness. Although it is tedious and time consuming, each signature, each appointment, and each trip to FedEx means we're getting a few more steps closer to Abiella... and the thought of that brings me more joy than I can express. This weekend, I get to take a breather, relax with some great girlfriends, and enjoy the fall weather.  I can't wait to SIT.  But... it's not time yet.  I have 3 hours to go get the last piece of our dossier and to finish this paper... So, I'm going to stop typing and get back to work.
Hope You Have a Great Weekend!
Happy Veteran's Day!
mae mae

We Have a Match!! 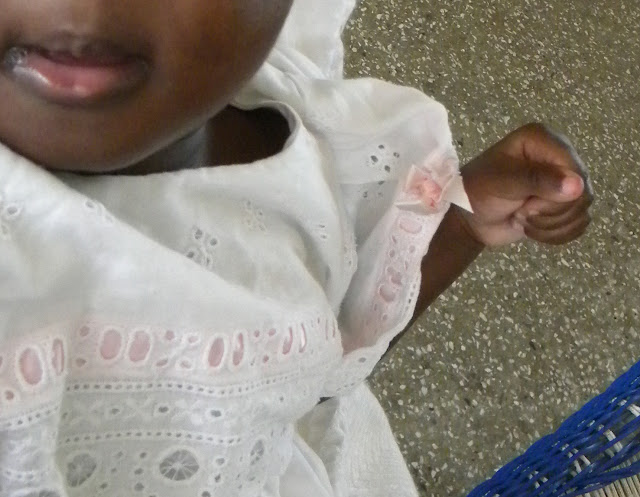 Isn't she cute?!?!!! I mean I know you can't see the whole picture but just look at those hands. She's so, so, so special and we're absolutely smitten. We can't post a full pic until we've passed court but until then, just imagine the most beautiful eyes you've ever seen and the cutest inquisitive smirk possible.

(You may actually recognize her from one of my earlier posts... I'll get to that)

Here is the story:

Last June our adoption coordinator gave all adoptive families access to 900 photos from her 2 ½ week summer trip to Ghana.  As I eagerly scanned through these photos, I noticed a sweet, beautiful, baby girl… I didn’t know anything about her other than she was living in a part of an orphanage for children with special needs. As the months followed, I often thought about her, although I did not know anything about her story.

Months later, in September, I woke up in the middle of the night, very restless.  I couldn’t sleep and finally decided to just get out of bed.  I wandered into the dark living room, sat on the couch, and turned on my laptop.  I very quickly landed on my coordinator’s blog (a blog I read often).  I was struck by one of her most recent posts titled “Baby O”.  In her post she described a little girl needing a family.  This baby was suspected to have some delays, but her delays would remain unknown until an adoptive family brought her home to American doctors.  According to her blog, this child was being called “Baby O” as she had no official name and O was the first letter of her orphanage.  She posted a picture of the baby’s body (full pics aren’t allowed on the internet) and I immediately recognized it as the body of the sweet girl I had seen in the pictures from her trip months before.

I quickly logged back into her photo account, searched through those 900 photos and found the pictures I had seen this summer of this little girl.  She was absolutely adorable and her eyes were stunning.

I immediately began praying for her, her situation, and her name. It bothered me so much that she didn’t have a name.  As I prayed and stared at her photos the letter ‘A’ kept coming to me.  And then again.  And then again… just an odd nagging in my mind..  “A, A, A, A,”  Finally, I said, “Okay God, are you telling me something?” and immediately the letters A-B-I-E-L-L-A came to me. Was this a name? If so, I had never heard of it… I quickly typed the letters into my google search and hit enter.  It immediately popped up “Abiella- Hebrew name for ‘God is my father.’”  I was struck.  It was significant.

This sweet orphan was not an orphan… she did have a father…a heavenly Father that cared so much for her. I was blown away. The moment was huge and an indescribable energy surged through me. I ran to wake up Sean.  He sat up, he listened, and he looked at the photos.

In the meantime, our coordinator had asked us to spread the word about this child.  They were on a search for her forever family. Although I wanted her to be mine, I felt it was selfish to not post her story.  I didn’t want her to stay one more night away from a loving family… and we weren’t at a place to make that decision just yet…so I posted about her on my blog, and prayed that I’d made the right choice.

After that, we continued to talk, pray, and listen.  Two weeks ago, we got the assurance and peace we had been asking for.  We knew without a doubt we were to move forward. Filled with unspeakable peace, true desire and crazy excitement, we sent our coordinator an email asking, “Is Baby O still up for adoption?”  It was the weekend, we knew we may not get an answer for days, but sure enough Sunday morning at 1:30 am we got a reply.  It began with, “Mary Susan, my heart just about leaped out of my chest! Yes she’s still up for adoption!”  After reading more about her story and praying some more we replied, “We’re so in love with this child. Let’s move forward.” And that’s what we did.  Two days later, we were filling out final paperwork and preparing to submit our dossier.

She will be named Abiella and be called Baby Abi for short. (Abi rhymes with baby… not Abby). We are head over heels in love, unbelievably excited, and absolutely desperate to get her home.  We want to love her, hold her, cuddle her, and give her all the care and attention she deserves.  For now, her medical situation is a mystery. As the original post stated, we know her body size is tiny and her head is a bit smaller than typical.  As we are eager to get a diagnosis for the sake of helping our sweet baby, there is NO diagnosis that could change our hearts, minds, or love for this precious child.

So, long story short, we are moving towards becoming a family of 3!  We hope to be bringing Abiella home in 4-5 months. We are thrilled, over the moon, ecstatic, and scrambling to get all the paperwork in to make this process as quick as possible.

We are absolutely in love and can hardly get anything done.  I've already made multiple trips to Target for baby girl clothes, started plotting the layout of her new room, and even begun sleeping with her new stuffed animals (we want them to smell like us when we leave them with her in Ghana during our first visit...)

We would love it if you would join us in praying for sweet Baby Abi. We pray that her health will remain strong during this time of waiting, that we will be able to get her home as quickly as possible, and that she will feel loved and nurtured during this time of transition.

We hope to visit her for the first time this month.  I'll be keeping you posted!!!!